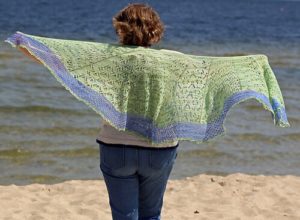 When I first met my husband, he had two young cats, Lena was almost 2 and Tigi was just five months old. Her mother had abandoned her and my husband, who had just lost Lena’s sister to an illness, gladly adopted her.

She was a cuddly lap cat, until one day, when my husband came home from work, she had changed. She was shy and didn’t want to be touched at all. We accepted that and celebrated each and every small progress she made again.

It was several years later, when she suddenly went into hiding behind the living room unit for several days, that she was diagnosed with depression and anxiety.

While anti-depressants for cats exist, they did not help her at all. They just made her even
more depressive. It got so bad at a time that we began talking about letting her cross the
rainbow bridge. But then she got a little better.
After a few days, my husband asked if I had noticed it as well, and I sure had. It turned out
that he had had the right instinct and stopped giving her the anti-depressants.
Instead, we found plug-in pheromones that helped and still help her tremendously. She
continued to get better and made progress. We could touch and pet her, and as long everything
happened on her terms, she was okay with it.
When she was seven years old, it was just a few days before my birthday, I was sitting on
the sofa with my knitting and she was lying next to me. Suddenly, she nudged me as if
she wanted to say “Put that away, I want to sit on your lap!”. When I put my knitting away to
see what she would do, she came on my lap and stayed there, happy to cuddle and be petted,
for almost an hour. To this day, this is one of the best birthday presents I have ever had! 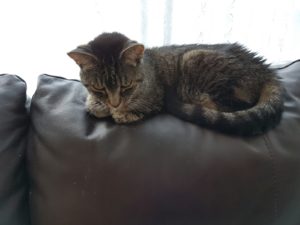 Now, Tigi is a grandmother – She will be 16 in October. She’s still doing fine, a cuddly lap cat
whenever she feels like it, although a little hard of hearing.
The baby cats we adopted after Lena’s death in 2016 would love to have her as their mom,
but she doesn’t really want to play that role. She enjoys cuddling with them every now and
then, especially with Orangina, and she lets them know when they should better leave her
alone.
Sometimes, she even enjoys going outside on our terrace and lying in the shade, or she
takes a look at the huge scratching post we have outside and considers if she wants to
climb up there for a moment before she decides against it.
For her shawl, I encoded the German words for “love”, “courage” and “trust” as well as the
word “Tigi”. I’ve mirrored the stitch patterns for love and trust, because we love and trust her just as
she loves and trusts us. I didn’t mirror the stitch pattern for courage, because only she
needed it. Adopting such a wonderful fur baby didn’t need any courage from our side.
The order in which I’ve arranged the patterns in her shawl – Love, Trust, Courage, Tigi,
Courage, Trust, Love – means that I always want her to be enwrapped in love, trust and
courage.
I love that the pattern for courage looks like a path. It’s not a perfect path, it deviates to the
right and left, but it always leads into the same general direction.
Although I hadn’t planned it, I loved it when I realized how often the number 7 comes up in
the courage pattern – just like the 7 years she was old when she made me the best birthday
present ever.
For the color, I chose a beautiful light, springlike green for hope, and a little accent of blue
because her mental health problems are part of who she is and nothing to be ashamed of.
I hope you enjoy knitting this shawl as much as I have enjoyed designing and planning for
it. If you like, give the pet in your life a cuddle from me! 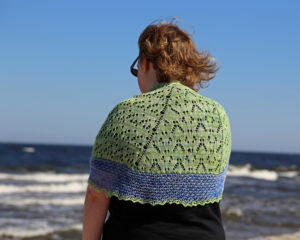 And of course, don’t forget to check out the shawl and an awesome introductory sale on Ravelry! (Hint: For those of you who are really quick, the shawl will be free!)